So, I wrote a blog post the other day; Pickin’ rotten cherries with Meryl. It was in reply to a post by Meryl Dorey of the Australian Vaccination Network, in which Dorey relied upon some pretty deceitful tactics to paint those who would hold her accountable as inhuman and unworthy.

Today, as noted in the title, I’m anxious and confused. I’m not sure what is right or wrong any more. You see, Dorey wants to bleat to the faithful about how mean the meaners are; but that the AVN would never conduct themselves with such opprobrium. It’s the moral high ground, you see. It’s the gist. It’s the vibe. Dorey doesn’t do negative vibrations. The AVN only does light.

Now, I don’t really care what personal attacks are made upon myself. I get more concerned with unfounded attacks on friends, family, colleagues, and total strangers. But, I will certainly point out when a grand hypocrisy is being fiddled before our very eyes; especially when the fiddler states that they don’t play that tune.

Yesterday, a comment was made by an official (and still, strangely, anonymous; whilst possessing the courage of a lion) representative of the AVN:

The comment was wrong on so many counts, and outright deceitful; as I was accused of harassing the family of a girl who it is claimed suffered a reaction to the Gardasil vaccine. I do not disbelieve, nor believe, anything, in this particular case. I am, as they say, skeptical. This does not equate to denial. The problem I have is that ideologues such as Dorey and her companions are making claims of certainty where none exists. If it comes to pass that Gabrielle’s symptoms were caused by the Gardasil vaccine, then, I will agree that Gardasil was the cause of Gabrielle’s reactions.  I reiterate what I said in my comment:

“Gabrielle was injured by the Gardasil vaccine” [comment made by Dorey on the AVN page]. Big call there, Mrs Dorey. There has been no link established that this is the case, apart from certainty on the part of those who claim a link.

This is just a statement of fact. I also included commentary from Dr David Gorski, with whom I fully agree:

Not surprisingly none of the questions over the timing of the development of Gabi’s symptoms are mentioned, which have been described in various news reports as beginning “within weeks” of her having received the third dose. Correlation doesn’t necessarily equal causation, but in Gabi’s case it’s hard not to note that even the correlation seems pretty darned weak, maybe nonexistent. None of this, of course, is mentioned in the movie; Gabi’s and her mother’s unwavering belief that Gardasil caused her illness is accepted as Gospel, and it is pointed out that Gabi’s neurologist Dr. Dwight Lindholm has stated publicly that Gabi’s illness is due to Gardasil. How did Dr. Lindhlom come to that conclusion? It’s never really explained in the movie (or anywhere else that I could find), and apparently the filmmakers are hoping that no one realizes that just because a neurologist thinks that the vaccine caused Gabi’s illness doesn’t make it so. I feel sorry for Gabi because she has horrible health problems. I really do. No one should have to have such horrible health problems at such a young age. However, I just don’t see any good evidence that her current health problems are due to Gardasil.

I note this example because it is important to observe how gullible cult members can be duped into believing something which never happened: no family has been “harassed and  abused” with “foul, hateful words”. This is simply a lie. But, the faithful swallowed it: three people “liked” the comment from the brave AVN admin, and one more had this to say about me, after the admin’s comment:

And, here’s a latter addition from dog breeder, Anita Bugges:

This is how it works in cults. The comments are still there, unchallenged, in all their dishonesty.

I wanted to lead in with the above examples, as there was something rather more sinister posted by Meryl Dorey this morning:

The link takes us to this post by anti-vaccine personality, Mark Sircus. The “String the Bastards Up” title is not a euphemism, as I was hoping (for Dorey’s own sake), when I first saw the title. No, they are talking executing CDC officials, doctors etc. I won’t go into the whole sordid post except to cite a few recommendations from Sircus, as applauded by Dorey:

For all those who are for the death  penalty, my message will be clear. I am calling for the conviction and the  worst possible punishment under the law for certain people in government who  are in the medical field.

we are letting doctors in white coats inject poisonous heavy metals  into babies and paying them well for it.

I want to bring the image of  the case of a monster who commits mass murder and torments children and their  parents. In this case we have a group of them who deserve to be lynched and  they work for the federal government at the Centers of Disease Control (CDC).

Most people would have no contention with  lining up mass tormentors of children against a wall with the punishment of  life imprisonment in solitary confinement. It certainly looks like we have solid evidence that  there are people who have conspired to mislead doctors so they continue to  inject highly dangerous chemicals into children.

So you can understand why I think these people  should be lined up against a wall. Actually there is no punishment that could  possibly compensate for the suffering of autism and the tragedy of vaccine deaths.

So what should society do to punish the  doctors and medical scientists who have deliberately set the conditions for  babies to either die or live a life of dire stress with autism and other  neurological conditions?

There are a few men and women in this area  who deserve special mention in that they throw their full weight into lying to  the public about vaccines and make a lot of money doing so. I do not want to  mention names and I really do not want to get angry but there is a fire in my  belly that rose high when I saw the latest in the thimerosal saga. [wow, I’m glad he isn’t angry]

They say that the clergy from the Church  during the Inquisition truly believed in their mission as they tortured  innocent men, women and children and there is no doubt that most pediatricians  truly believe in their vaccines no matter how many children they hurt. As a  group they continue to wear blinders and follow everything their medical  superiors
say. These superiors are corrupt down to their very bones…

I didn’t bother looking into the wretched sources of Sircus’ rant. It is a conga line of Mercury Militia wingnuts: the usual suspects. You can see for yourself.

The important thing to note is that Meryl Dorey posted this, as  the President of the Australian Vaccination Network, on the Official AVN Facebook page. Dorey added her own commentary to the link:

String the Bastards Up-if you’ve intentionally covered up the harm vaccines can do,you deserve 2 be charged with a crime.

So, we can safely assume that it is not okay for other members of the public to cite an internet meme, with as much implied threat as telling someone to “go to hell”,  in reply to the cruelty displayed by Dorey and her cult; but, it is okay for Dorey to call for the summary execution of CDC officials and other medical professionals, based upon the lies of the Mercury Militia.

Oh, okay. Now I get it. I understand Dorey’s ethical argument completely.

Whilst doing some intensive internet research, on the internet, I came across this piece of irony-meter-blowing, standard Dorey:

On the morning of January 14 2011, Meryl Dorey made a comment regarding an article from the NEJM, titled The Age Old Struggle Against the Anti-Vaccinationists. It is a great article which accurately portrays the cult of anti-vaccination as a belief-based movement which has not really changed strategy since its beginnings, and relies on just as much evidence now as it did previously (ie: none). The article was posted here, by admin Susan Butler. Here is Dorey’s comment:

This article incites violence and hate. It uses the rhetoric that will cause others who are already on the verge of mental instability to lash out at people like ourselves who question the safety of vaccination. One would think that after the attempted assassination of Congresswoman Giffords and the shooting of so many others, a prestigious publication like the New England Journal of Medicine would not publish such a poorly thought-out emotionally fraught and unscientific article that may very well lead to people on our side being harmed by the anti-choice fringe. 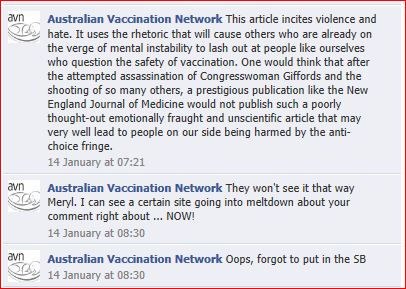 Maybe we could entice Meryl Dorey to read her own words and, then, reconsider her stance in posting, and agreeing with, the Sircus screed. Maybe, one day, Dorey would see her hypocrisy as seen through the eyes of the rest of the community.

0 Responses to I’m anxious and confused