In the last few days Meryl Dorey of the anti-vaccine, infectious disease advocacy organisation, the Australian Vaccination Network, has been upset that the North Coast Public Health Unit has not been obsequious in bowing to her demands to show up at two of the AVN’s money-making events. There are several reasons why this will not happen. Among them are: it is a breach of the NSW Health Code of Conduct for employees to go off and speak on behalf of public health, without prior approval of the media liaison department; getting up on stage with someone who has proven, time and again, that she will not be an honest broker of immunisation information is pointless, and gives credibility to that which deserves none; Ms Dorey has frequently denigrated and defamed North Coast Public Health employees, and taken their conversations out of context, misrepresenting the conversation which had taken place; and, appearing at an AVN event would be akin to slamming ones turgid member in a fire door, during a fire.

As expected, Dorey had attempted to put the spin on her failure to gain acceptance from normal people. She issued a press release on June 13 2012, complaining about her ill-treatment by health professionals:

Oh, the agony of being a pariah in your field of “expertise”…

In the second, Dorey states of the “Australian media”:

How do you like this? Belgian coverage of our press release on the refusal of the Public Health Unit to front up and defend vaccinations at our seminar next week. So Belgium and the UK are covering this issue but the Australian media are pretending nothing is happening.

This is an outrage! How dare the “Australian media” ignore such an important person? Surely the Belgian and UK “media” know something the Australian media does not? Well, no; not really. Here are the two blog re-posts: 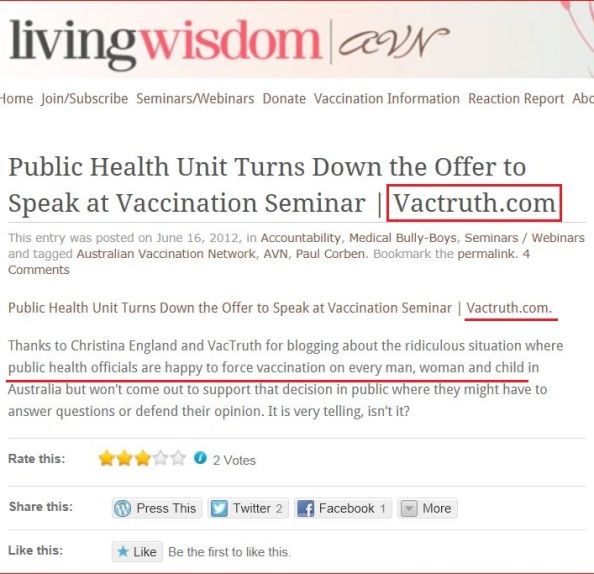 WOT! An anti-vaccine BLOG from the UK. I say!

WOT! An anti-vaccine BLOG from Belgium? I say, twice!

So, if blog posts from overseas count as “media” I guess my humble little blog should also count as media? And this would mean that the “Australian media” have indeed covered Dorey’s stunt. Yeah, I know. Big stretch.

Anyway, here is a little bit of niceness from Dorey and the interesting Diane Buckland, from the first blog repost:

NORTH COAST PUBLIC HEALTH UNIT Y U NO CONVERSE ME? Can anyone else figure as to why serious, intelligent, professional, caring people would decline to appear on stage with this person?

For the love of all that is precious in this beautiful world we share, Ms Dorey: aim the gun away from your foot.

Remember the days when the real media used to take Dorey’s press releases seriously? Take a bow, all of you who hold Dorey and her anti-vaccine organisation to account. Take a well-deserved bow.

0 Responses to More success for Stop the AVN: the world ignores Meryl Dorey