One of the constant themes of the anti-vaccination movement is the displacement of empathy for grieving parents and families. The Australian Vaccination Network have consistently shown that they are more than willing to put aside ethics and decency in the pursuit of their ideology. Whatever it takes: vaccines are to blame for almost all childhood illness and death, and they will go to any and all lengths to show that this is the case.

In October 2011 I wrote At the AVN it is acceptable to harass a grieving family. In it I included this quote from Meryl Dorey, in which she clearly states that anyone who harasses a grieving family will be “ejected” from the AVN:

Meryl Dorey also wrote this on July 30 2010, in the same blog post, A grieving family and baseless accusations:

As it always comes to pass, Meryl Dorey has a worse memory of her statements than those who investigate her statements. So, it should come as no surprise that Dorey reverts to form (a form of which she denies she is capable), to advocate that her followers contact grieving members of families who have lost infants. This is based on unfounded comments on the AVN Facebook page, from one of her followers. The follower comments:

Note, again: these claims are unsubstantiated. This has never stopped Meryl Dorey from swinging into action. Hang the cost to the families involved: 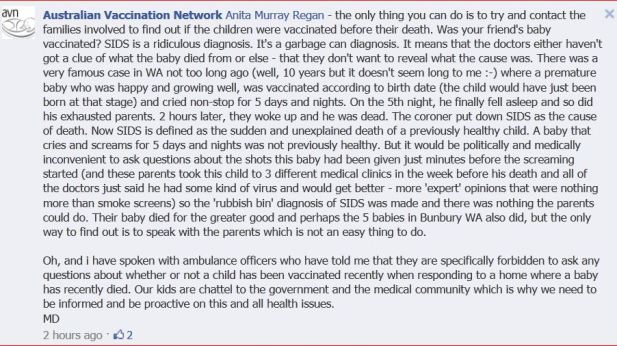 So, now, it is okay to harass parents of deceased infants?

Personally, I can’t imagine a pattern of thought which leads to one thinking that this is okay. And it certainly makes Dorey’s former claims to be above this sort of cruelty ring hollow.

As noted by a friend, this little episode will become AVN folklore, in time. Facts? Compassion? They have no place in the ideology of the anti-vaccination movement.

The sooner this callous group of people is sent packing, the better.

I was waiting for some correspondence regarding Dorey’s claims regarding paramedics, in her above screed. I’ve heard back from two paramedics (thanks goes to those who know who they are):

“We’re not forbidden. That’s ridiculous. I ask the parents of every child case if their [the child’s] vaccines are up to date”.

“Asking about vaccination is probably question 2 or 3, my experience is this is one of the very 1st things they ask at hospital if/when we transport children to an ED for further care/assessment.”

One day Meryl Dorey will speak on things of which she is aware. Don’t hold your breath.

It would appear that the thread on which Dorey advocated that her members contact grieving families has been deleted. In the thread, Dorey denied advocating for such a course of action, despite her clear indications to the contrary (in the above screen capture), and her follower’s inclination to follow her advice (in the screen capture below). 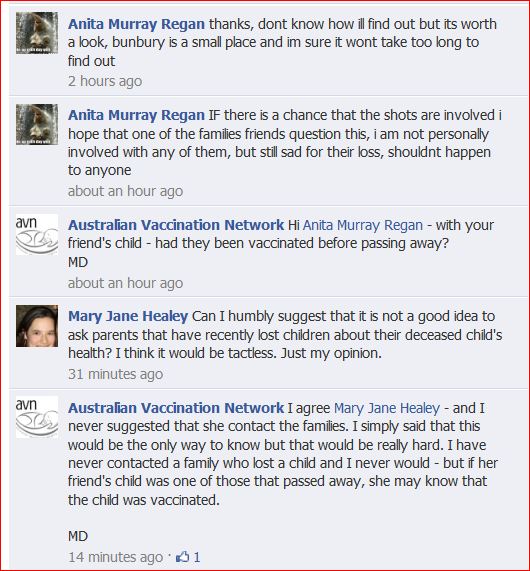 Thanks goodness for screenshots.

“I have never contacted a family who lost a child and I never would”: one day I may get permission to address this particular claim. One day.

Unfortunately, it appears that someone in Western Australia did follow the advice of Meryl Dorey, and contacted the grieving parents of a deceased baby, to ask them if their bub was vaccinated. This is from the Facebook page of this grieving family. I feel a little ill. 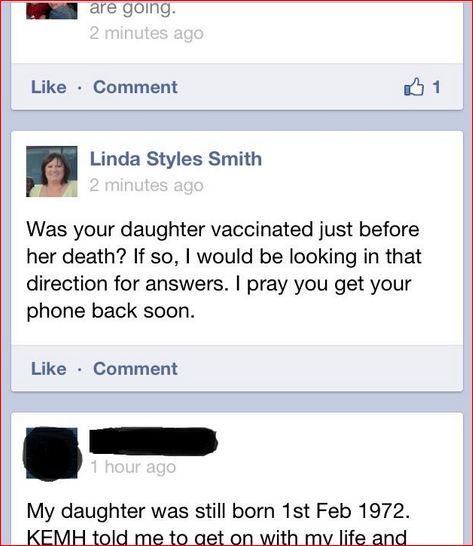 This is what anti-vaccinationists do, in the name of dogma. This is why we combat them. Enough, already.