WoT is this I don’t even

Posted on September 13, 2012 by reasonable hank

Two days ago Meryl Dorey of the Australian (anti) Vaccination Network had a minor tremor on the AVN Facebook page. For some time Dorey and her AVN have been aggrieved that people should provide a rating on the Web of Trust site. More about this in a moment. Here is Dorey’s Facebook comment: 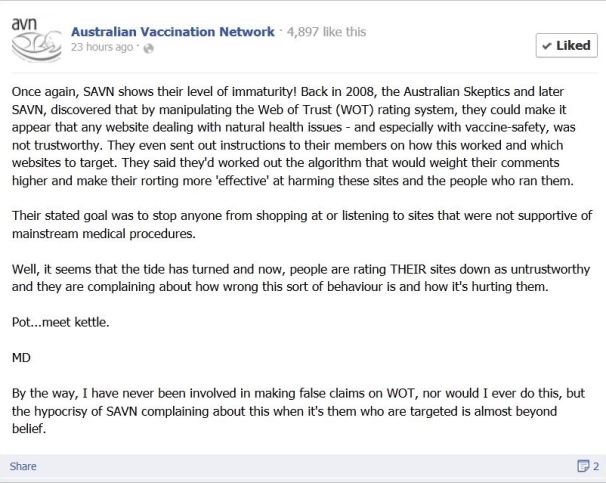 I do believe I can see steam rising from this pile

I can only imagine that Dorey is responding to a recent post by Tim Farley, in which Tim provides some valuable guidance to those of us whose sites have been fraudulently reported as containing malware (the three sites: mine, Losing in the Lucky Country, and Skewed Distribution are all WordPress sites; that is, they don’t contain malware by the very nature of the host). Tim also provides a reminder that we need to be vigilant in regards to false WoT ratings from disgruntled anti-vaccinationists who like to silence criticism.

As you can see from the above screen capture, Tim’s post was enough to provoke Dorey into making some more extraordinary, wrong, and possibly libellous claims about Australian Skeptics Inc. And, her claims about Stop the Australian (anti) Vaccination Network have been addressed before (and debunked by her own friend and co-admin, Susan Butler). Back in May 2011 I uploaded this grainy document: Meryl Dorey: Put Down the Keyboard and Back Away Slowly. I’ll reproduce the juicy bits here.

And, as noted in my document (linked above), this was the first SAVN had heard of Web of Trust. In fact, as also included in the document, this fact was substantiated by Susan Butler, Dorey’s friend and ethical cherry-picker:

So, SAVN found out about Web of Trust no earlier than May 2011, because Meryl Dorey told us about it; this was confirmed by Susan Butler in August 2011; yet Meryl Dorey insists that the Australian Skeptics and Stop the AVN have been manipulating WoT with “false complaints” since 2008. Tell me something doesn’t add up, here, else my head rolls off its shoulders.

Further to Dorey’s recent meltdown, she makes further accusations that these same two organisations have been instructing the world in how to work out “algorithms” in this campaign? This is also the  first I’ve heard of this one. I’ve emailed Australian Skeptics for a brief comment on these accusations (I don’t appear to have them on speed-dial as Dorey would think, so I’ll wait for their reply).

I want to have a little closer look at the WoT site; what is rated; and how this compares to vexatious fraudulent malware reports, as recently practised upon our blogs. Here is the AVN Scorecard:

Tis a thing of beauty, and accuracy.

Trustworthiness for the AVN is poor. This is accurate, given that the AVN cannot be trusted to provide accurate, reputable immunisation information, however hard we plead with them.

Vendor reliability is also poor. One might think that this rating is deserved, given that the dictionary meanings of “6 issues/annum” were altered by the vendor.

Privacy didn’t appear to be a warranted poor rating until Meryl Dorey published the private email addresses of correspondents on her blog, in a fit of spite.

Child safety would have to be my favourite. Any website that advocates for children contracting infectious diseases, and treating them with magic water, deserves all the poor child safety ratings it can get. Not to mention defending child killers. And, when people are done down-rating the AVN for child safety, they should have a cuppa, come back, and down-rate them some more.

Dorey tells us that the ratings made on the WoT Scorecard are “false reports” made by “immature bullies” depicted as tantrum throwers. You be the judge of that.

In contrast, the false reports made against WordPress blogs, that they contain malware, are indeed fraudulent; deceitful; intimidatory; cowardly; the list is long.

Sometimes it’s just too easy. Dorey may forget, conveniently, what she says and when she says it: but the SAVN elephant never forgets.

I’ll leave you with a little tidbit I found whilst re-searching for the WoT Scorecard. This is Meryl Dorey, on the WoT Forum, arguing against the AVN’s poor rating. Meryl Dorey states everywhere that she is not anti-vaccine. Look at her screen-name, and enjoy:

0 Responses to WoT is this I don’t even