I have been following the exploits of Ann Bressington for a little while. She is a Member of the Legislative Council in the South Australian Parliament. Remember this. It is important.

Ann Bressington has toes in many conspiracy theory and denialist movements. She is anti-fluoride, anti-vaccine, believes in the New World Order, and believes chemtrails are real. She is a Monckton advocate. She was busy pushing the Agenda 21 conspiracy theory, until her new shiny thing came along: The One People’s Public Trust (another incarnation of the Sovereign Citizen and Freeman on the Land movements). She is a public health menace.

On February 25 2013 Bressington took it to another level. She incited her followers with this:

Bressington got what she wanted. Her followers answered with a barrage of abuse and vitriol, which included this:

These comments, calling the Federal Health Minister Tanya Plibersek a “criminal”, and the call to “lynch her”, have remained on Bressington’s publicly available Facebook profile for almost one week.

Bressington’s profile is public. She uses it to conduct her political activities. She is a politician sitting in an Australian parliament. Bressington has accused journalists and members of the public of spying on her; invading her privacy; invading the privacy of people who comment on her publicly available profile; bullying, for sharing her publicly available posts to a wider public; stealing her identity (really); and of course, of trolling.

Pretty soon, Bressington’s behaviour was noticed. Bernard Keane from Crikey contacted Bressington to ask her some questions about the poster and the “lynching” comments. Bressington responded by publishing Keane’s email, including all headers, including telephone numbers. He responded to her actions, here.

Tory Shepherd from the Adelaide Advertiser also contacted Bressington to ask about the same “crimes against humanity” accusations made against Minister Plibersek. Bressington promptly posted this to her profile, with the original wanted poster. In all, Bressington re-posted that wanted poster twice, after being called to account for the first one. She also urged her followers to share the wanted poster far and wide. And they did. Shepherd responded to Bressington’s claims, here.

Not only has Bressington refused to answer questions about the above post, and its call for the death of Minister Plibersek, she has gone on a rampage on her own wall in an attempt to discredit those who would dare ask her questions. I now have a plethora of posts devoted to me on her profile (all sourced from anti-vaccination campaigners and their hilariously incompetent posts – she has even cited Patrick ‘Tim’ Bolen. Get. Out. I am serious). It’s hard to judge, but, I think this one might be my new favourite, given its internet detective prowess, publishing the names and occupations of people who are not me, and mocking them (hint: I may have replied to that Dorey link, here). So, Bressington has cited Bolen, Dorey, and a Hempel blog post to discredit me, and incite her followers to cyberstalk the wrong people. Did I say that they are researchers of the health effects of things?

From her supporter, Samuel Crabb,

I say we meet that Force with Force. But, it’ll take lots of planning, not to mention we’ll have to FIND some descent cops, Yes we don’t need them but it sure would make things easier. I reckon there needs to be a take over, let them know, if they wanna continue this, they’ll be meeting with death. The way I see it, there will be no peaceful revolution, it won’t happen, there will be Violence, and I reckon we can minimize it, by disposing of the appropriate people. Sure someone will try and take their place, that’s when we give them an incentive not to…

These comments are still on Bressington’s profile. She is aware of this fact.

Yesterday, a new page appeared on Facebook: the Ann Bressington Appreciation Society. Bressington told her supporters to report the page, and to refrain from commenting on there: 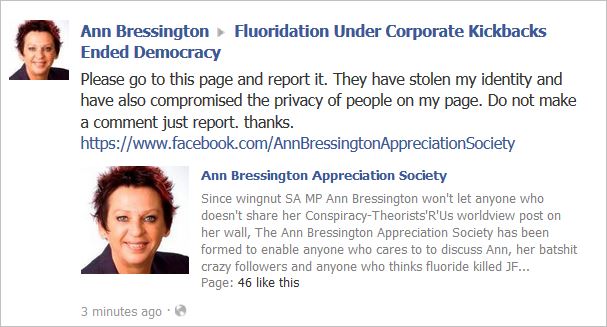 Which Bressington promptly did. So I asked her the questions to which everyone wants an answer:

Surely she will denounce her followers, right?

Of course, true to form, like a politician, the type of which she would like to see sent to the gallows, Bressington refused to answer these simple questions. I asked her several times on that thread, as did others, and she demanded that we have a face-to-face meeting, using this red herring as an argument in its own right. She is still arguing that she hasn’t seen any death threats, even though they have been pointed out to her.

Death threats and their incitement aside, all in all, it’s a very tawdry affair. Arguing with wingnuts is not my preferred hobby. But – and this is important –  I think the South Australian Parliament has some serious soul-searching to do. Is this the behaviour of a person with the sort of attributes who should be in the halls of power?

There are parliamentary standards to be maintained which are not present with this sort of disordered thinking. The community deserves better. And, if any South Australian members of parliament read this, please hold this person to account with the appropriate mechanisms.