Meryl Dorey’s struggle: is it the same as six million murdered Jewish people?

Comparisons can be drawn between the current situation in Australia and historical social conflicts such as the McCarthy Era in the US and Hitler’s vilification of the Jews during the 1930s and 1940s. At least with these issues, there was plenty of public debate going on.

Yes. The downtrodden anti-vaccinationists and non-vaccinators are just like the Jews under Nazi Germany.

I’m not sure how one offensive person can be even more offensive than usual.

I’m not going to say any more. I’ll let Rabbi Baruch Stone do the talking: 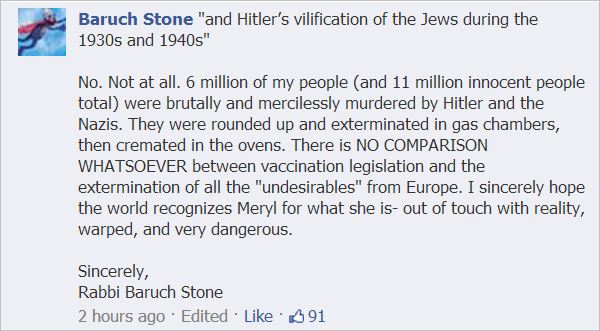 Rabbi Stone made the same comment on Dorey’s blog post. Not one to admit fault, Dorey argued with the Rabbi about her ugly comparison made above:

And, if things couldn’t possibly get more offensive, Dorey found a way, stating:

we are currently in the midst of another holocaust

Again, I cannot surpass Rabbi Stone’s final comment. I think he is very likely to be someone who may know what he is talking about when it comes to the subject of The Holocaust, and the arrogant, ignorant, offensive people who abuse the memory of those who died, and those who still suffer:

May G-d have mercy on your soul.

0 Responses to Meryl Dorey’s struggle: is it the same as six million murdered Jewish people?