The Bachelor and the Bollocks

Posted on September 13, 2013 by reasonable hank

The Chiropractic Board of Australia cracks down to protect the public.

The Chiropractic Board of Australia is cracking down on chiropractors who step outside their primary role as healthcare practitioners and provide treatment that puts the public at risk.

To protect public safety, the Board has:

– ordered practitioners to remove all anti-vaccination material from their websites and clinics
– removed several courses from the list of approved CPD programs, and
– introduced random audits of practitioner compliance with the Board’s registration standards. [Media Release August 8 2013]

I can’t wait for the team of crack auditors to start wending their way across the nation.

So, a sordid and demeaning, cattle-auction program called The Bachelor started in Australia, this week. I’m not going to focus on it as it’s the sort of thing I think represents many of the things that are wrong on our tiny blue dot. But, I want to focus on the star, Tim Robards.

Tim Robards is above all else a businessman, socialite, and self-promoter. He is a chiropractor belonging to the Chiropractors’ Association of Australia, and the Australian Spinal Research Foundation, after all. He’s all PR, and skin, apparently.

In my recent series I didn’t include Robards’ business, Health Space Clinics, as there was only the one anti-vaccine post on their Facebook page. I started Tweeting this screenshot on the TV show’s first night: 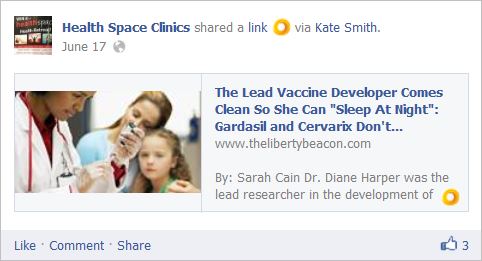 It’s all bollocks, of course.

As a quick aside, you can see in the screenshot that the post was shared from Kate Smith, the rabidly anti-vaccine wife of Robards’ other chiropractic colleague, Adrian Dennewald.

The Bachelor Australia star Tim Robards has refused to comment on anti-vaccination propaganda promoted on his chiropractic clinic’s Facebook page.

The Health Space Clinic’s Facebook page features a link to a discredited 2009 article claiming the risks from the Gardasil and Cervarix vaccines are much greater than the risk of cervical cancer itself.

Robards is co-owner and director of the clinic.

Cervical cancer kills more than 200 Australian women each year and is the second most common cancer among women worldwide.

The post appears to contravene a Chiropractic Board of Australia directive to all practitioners “to remove all anti-vaccination material from their websites and clinics … to protect public safety”.

A spokesperson for Network Ten, which broadcasts The Bachelor Australia, said that Robards would not make any public comment about the anti-vaccination material.

“It’s a professional website, it’s related to his business and not him personally,” the spokesperson said. “It’s a link to a website and it’s not an endorsement.”

Nicole Newton from the Chiropractic Board said the organisation took a hard line on chiropractors promoting non-evidence based views.

“The Board takes a very strong view of any practitioner who makes unsubstantiated claims about treatment which is not supported within an evidence based context,” she said.

The Federal President of the Australian Medical Association Steve Hambleton has called for chiropractors promoting anti-vaccination campaigns to be struck off.

I hope Nicole Newton from the CBA has seen the recent series on anti-vaccine chiropractors. I also hope she would have to agree with Steve Hambleton.

Today, the Herald Sun issued this post (yesterday’s URL takes you to this same story), by Andrew Fenton. What intrigued me, and gave me cause to address the Robards/Bachelor issue, was the defiance shown by Robards’ boss, Nick Wood, in stating that old, tired canard, we support our patients’ choice. Of course you do. Everyone does. That does not go anywhere near addressing the question at hand: WHY ARE YOU PROVIDING ANTI-VACCINE MISINFORMATION? Here is the text from today’s version of the Herald Sun article:

The Bachelor Australia’s boss, Nick Wood, has defended the reality TV star and chiropractor over an anti-vaccination Facebook post.

Tim Robards yesterday would not comment on the HealthSpace Clinic’s Facebook page which features a link to a discredited 2009 article claiming the risks from the Gardasil and Cervarix vaccines are much greater than the risk of cervical cancer itself.

Robards is the co-owner of the HealthSpace Bondi Junction branch.

But the clinic’s director, and Robard’s friend Nick Wood, said the post did not reflect either his or Robard’s views.

“It couldn’t be further from the truth,” he said. “We support our patients’ decisions in whatever choice they make about vaccinations.”

The Chiropractic Board of Australia has issued a directive to all practitioners “to remove all anti-vaccination material from their websites and clinics … to protect public safety”.

A spokesperson for Network Ten, which broadcasts The Bachelor Australia, said yesterday that Robards would not make any public comment about the anti-vaccination material.

“It’s a professional website, it’s related to his business and not him personally,” the spokesperson said. “It’s a link to a website and it’s not an endorsement.”

So, in reply to the non-defence provided by Nick Wood, which didn’t address the questions raised about the anti-vaccinationism of Health Space Clinics, I’ll ask this question: why do you sell anti-vaccination bollocks in your shop?

If you have a look above, third down on the left, you’ll see 7 Things your doctor never told you. That is a book written by anti-vaccine chiropractor Warren Sipser, who is a board member of the CAA’s Victoria outlet. Fortuitously, I covered Sipser’s vaccination chapter in my most recent post:  Anti-vaccine chiropractors 50 – the CAA Boards Extravaganza. Have a look. It is one of the most embarrassingly inaccurate pieces of crap ever written on the subject of vaccination. And Wood, and Robards, and Health Space Clinics, sell it in their shop. They also sell anti-vaccine chiropractor Jennifer Barham-Floreani’s book, Well Adjusted Babies, which contains anti-vaccine misinformation.

So, has Health Space Clinics removed the lie about Gardasil and Diane Harper from the Facebook page? Of course they haven’t. Here is the link. It’s okay. I’ll do your work for you.

And we thought the bollocks in this link was the worst we would see (NSFW).

I’m kicking myself a little that I didn’t include this screenshot of Nick Wood, sharing the dishonest petition by the callous anti-vaccine zealot, Meryl Dorey. I already possessed the screenshot, but, due to the volume of anti-vaccine chiropractors, I forgot about it. Not only is the petition dishonest in its claims, Wood adds this dishonest comment:

Would you inject a drug into your arm that you knew killed your brother? I think not.

Buck up with the evidence, Mr Wood. I’m waiting to see it. Pro-choice, my arse.

At least he got a caning from his friends due to that horrid little post.

0 Responses to The Bachelor and the Bollocks