The public death rattles of the Australian Vaccination Network

The callous anti-vaccination organisation, the Australian Vaccination Network, is soon to be no more. They must change their name to something less deceptive, which better reflects their true intent – which is to dissuade parents from immunising themselves and their children. They lost their appeal against Fair Trading NSW, who ordered the name change.

Stop the Australian Vaccination Network has won. In four and a half years we have turned the tide from what was once an organisation which was sought for immunisation comment, to an organisation which is no longer sought for comment on anything apart from its own callousness and dishonesty. The “AVN” is defeated. They will rename. I doubt any of its critics are going anywhere. I’m certainly here for the long haul.

Today the AVN made this post, again making defamatory claims about two pharmaceutical companies, that they are “pathological criminals”: 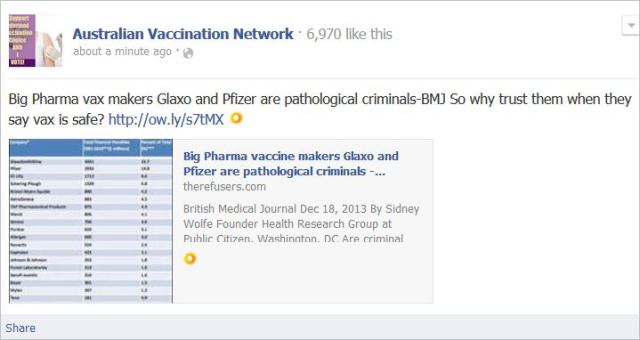 Now, I don’t care much for big business – pharma included – but, I have a strong belief that they be allowed to hold crackpots accountable, legally. They won’t do it, for a variety of reasons. I think they should. They won’t.

I let them know, on Twitter. More should. That’s just my view:

It is well past time @pfizer & @GSK took action against the AVN, for being labeled “pathological criminals” #StopAVNpic.twitter.com/sIje8bQrnD

I’m sure @pfizer & @GSK could put to good social use a whole macadamia farm in Northern New South Wales #StopAVNpic.twitter.com/sIje8bQrnD

Now, I want to remind everyone that the Australian Vaccination Network is classified as a recognised Health Service Provider, as a Health Educator, under NSW health legislation. The AVN is also the holder of a Charitable Fundraising Authority. It is a not for profit incorporated association with a code of ethics, registered with Fair Trading NSW.

I give you, the real Australian Vaccination Network:

Peter Tierney (aka Reasonable (W)Hank – writing to his bosses at Glaxo Smithkline and Merck asking them to somehow remove the macadamia farm from Meryl’s family and to take action against her for forwarding an article that was printed in the BMJ and on the Refuser’s website about their fraudulent activities. No concern about the fact that these companies have admitted to being guilty of committing criminal offenses and paid tens of billions of dollars in fines; and that adults and children are dying and being permanently injured as a result of these crimes.

Really, you couldn’t make these guys up! Keep it up Pete – we really do love watching you grovel to the companies who pay your bills. But just remember, karma is a bitch and she’s got your number! 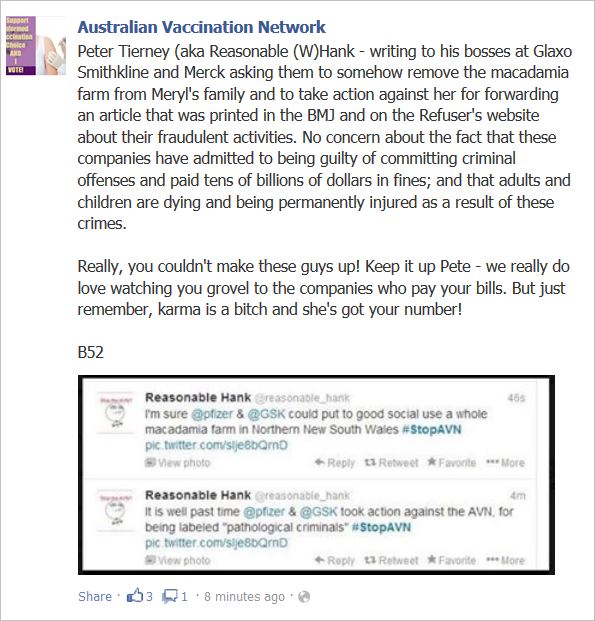 If ever there was a fitting grand statement of the raison d’etre of this dangerous, nasty, callous, dishonest, intimidatory cabal of disease advocates, who dine on the tragedy of the death of innocents, it is the above; as well as these vile comments from Meryl Dorey, two days ago:

And, even worse, from yesterday. Dorey reverts to the monstrous form which ensured the creation of Stop the Australian Vaccination Network:

Good riddance. We’ll see you in the new year.