TW: AVN claims vaccination is rape and doctors are rapists…again

On January 15 2011 Meryl Dorey of the anti-vaccination fundamentalist group, the Australian Vaccination Network, perpetrated one of her most hideous acts, amongst her litany of hideous acts:

Dorey was shredded for the above post. It has become part of the folklore of Dorey and her deranged anti-vaccine cult; is there nothing they won’t do and say?

What does the AVN do?

Australian Vaccination Network This post isn’t tasteless – it is honest. What truly IS tasteless is our elected government trying to tell us that we have to vaccinate our children even if we don’t believe it is best for their health. THAT is tasteless. And if you find this post confronting – imagine how you would feel if you were a parent who was being told that they were going to have to vaccinate their children or starve.

And not only did they post the above, violent image – an image which asserts that immunisation is rape, and that doctors are rapists – they then defended posting it because it’s the government’s fault.

It was defended again, in the same fashion, by Giselle Tonee, whom I can only assume is the AVN Facebook page admin who posted the image:

Giselle Tonee Telling it like it is and it should make us uncomfortable. What do you think is going to happen when the next step occurs i.e. mandatory vaccinations for all ages. With 300 vaccine patents pending, we soon will have no medical choice and children will be kidnapped from parents, as they have been in the US and vaccinated. If stories about Abbott being backed by Amgen, an American multinational bio-pharmaceutical company are true-an obvious conflict of interest and bias exists. 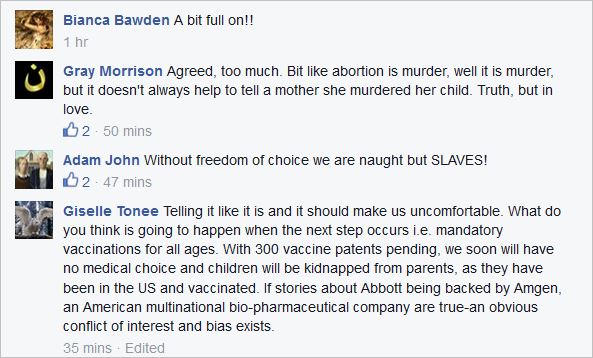 All I can do is congratulate the commenters who unequivocally denounced the post.

19 Responses to TW: AVN claims vaccination is rape and doctors are rapists…again