Just a quick post. I’ve been quite busy of late, but, I just thought I’d share a brief something I revisited whilst searching for something else.

Professor Brian Martin, of the University of Wollongong, has been keen to assist the Australian Vaccination Network and its President, Meryl Dorey, in dehumanising a citizen group set up to hold the AVN to account. If you dehumanise the opposition, they are easier targets, you see: Brian Martin would agree with that last bit.

Back in June 2011, Martin wrote an article for the Illawarra Mercury, called Vaccination Attack. He reproduced the original submission on his website.

Funnily enough, he writes smugly that “no SAVN member has challenged my account”. Well, they did, and Martin also agreed that some of his assertions, regarding “pornographic images” which were sent to Dorey, incorrectly inferred that they were sent by members of SAVN: with no evidence to back that up. Indeed, SAVN members were incensed that anyone would do such a thing. Nice of Martin to keep alluding to this as a part of the “attack”.

I want to look at one of the claims made by Martin. I noticed this last year, but, it gave me such a chuckle that I had to point it out; because, you know. I’m glad that Martin published it, though. In his article, linked above, Martin makes this blunt accusation about the horrible people who hold the AVN to account:

“…the implication being that Dorey would meet Fawkes’ fate, namely torture and execution, at least metaphorically.” ORLY?

Okay. That is a pretty strong comment to make about a group of people. Maybe we should have a look at the reason why someone superimposed a Guy Fawkes mask over Dorey’s head. It might be a little different from what was reported to Martin. Maybe he should check his sources for accuracy, instead of blindly running with any evidence presented to him by Meryl Dorey (we’ve been there before, right?). It could turn out to be quite embarrassing for a professor if he got it wrong. In fact, it would be even more embarrassing as the professor published his claims, whilst gleefully raising a triumphant fist in the air, having vanquished the evil.

Let’s see what really caused the superimposition of a Guy Fawkes mask on Dorey’s head:

Arrrrrgh, what is that thing…KILL IT WITH FIRE

It was mockery, and contempt. It is that simple. At this time, Dorey thought it was a great idea to use that thing above as the avatar for the AVN Facebook page. The mockery was for the ineptitude of the poor craftsmanship on display. The contempt was for the support of a man who had just been struck off the medical register, for performing unethical treatments on autistic children. Then, there’s also the money Wakefield made (without telling his hospital of the money he was making – that’s a huge conflict of interest, right there).

So, as certain as Martin maintains he is, regarding the quality of his research, and findings; this is all a little bit silly. I’m glad it wasn’t me. That’s all I can say. But, I’m not a professor of sociology who has thrown his weight behind an anti-vaccination, pro-infectious disease advocacy organisation of which he is also a financial supporter, whilst claiming objectivity.

V for Vendetta, much? Hang facts. Facts are just annoying things that some people believe, right?

With thanks to Drunken Madman for the reminder placed on his post covering the above:

Failing at one’s own job

Here is a picture of my son, then aged 6. I post “this photo with [my son]’s face covered by a Guy Fawkes mask, the implication being that [my son] would meet Fawkes’ fate, namely torture and execution, at least metaphorically”.

I just wanted the chance to be ridiculous as well. 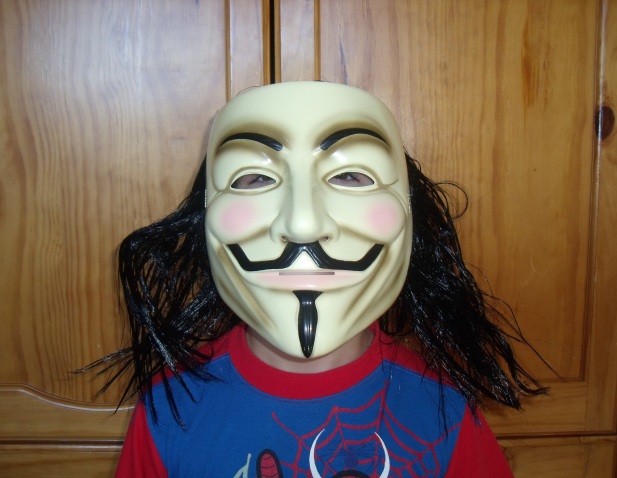 Srsly, who couldn’t love that face?