Courageous *and* anonymous: the official representatives of the Australian Vaccination Network.

This post will include a lot of screen captures, as I like to allow those who are the main subject to do most of the talking…by your own petard etc.

As everyone knows, the Australian Vaccination Network has its own official Facebook page. It is touted by Meryl Dorey as one of the official fora from which the AVN can spread its message of infectious disease advocacy, water as immunisation, and promotion of quack cancer cure flesh solvents, amongst the many other rounds in its arsenal of dangerous evidence denialism.

So when Meryl Dorey takes a break, who’s left in charge of the steaming ship? This post from two days ago tells us: 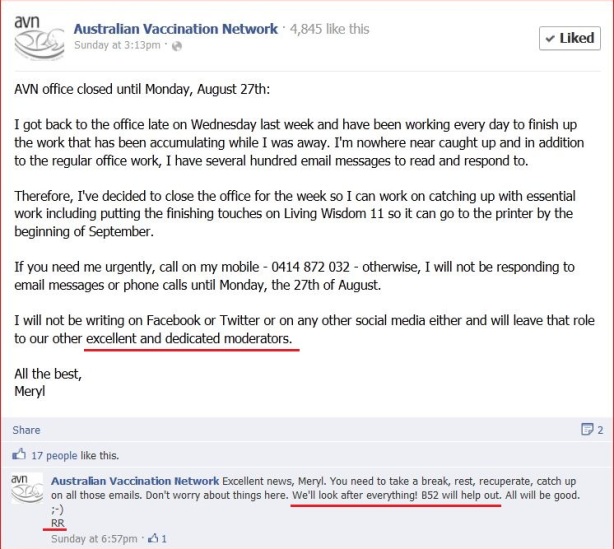 B52 and RR: the “excellent and dedicated moderators”.

If there is one thing for which I will credit Meryl Dorey; it is that she at least attempts a semblance of ownership of her own claims, as bad as they are. We have met the embarrassingly nasty B52 before, but she won’t be the one doing the talking today. She’s more of a running in-joke. But, B52 did make this comment for which a reply was made by someone who is all three of these things:

Oh, B52. You never fail to provide the fodder against the AVN.

I want to focus on allowing RR to do some talking. What really piqued my interest was a simple Tweet, made in response to a public comment from a doctor who replied to B52’s comment (above); that, “I am a scientist, a doctor, and a published researcher. Last time I looked, no one associated with the AVN was any of those things”.

This is interesting. Here we have an anonymous coward wanting to cite their qualifications, whilst anonymously supporting the AVN and all of its nefarious activities, whilst rejoicing in its official administrative roles on an official AVN fora (the AVN Facebook page). 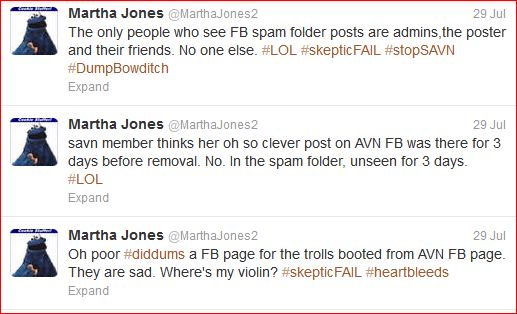 The joy of deleting those who hold a polite, contrary, evidence-based view of immunisation

David Mitchell wrote a great post about those who desire to post anonymously. Their comments are basically graffiti. I would agree mostly with his article. But, in this circumstance, this is an official representative of an incorporated association which extracts funds from the public, via donations, under the legality of holding a Charitable Fundraising Authority.

Basically, RR: shit, or get off the pot. You are an official spokesperson on an official page of an organisation, as noted above. Point to your publications; your doctorate; your science degrees. Don’t let hiding behind anonymity encumber your brevity any longer.

That’s about it. I’ll round off with three recent screen captures (in no particular order) of the courageous, anonymous AVN admin’s Twitter stream. See how the AVN is in the good hands of these “excellent and dedicated moderators”. 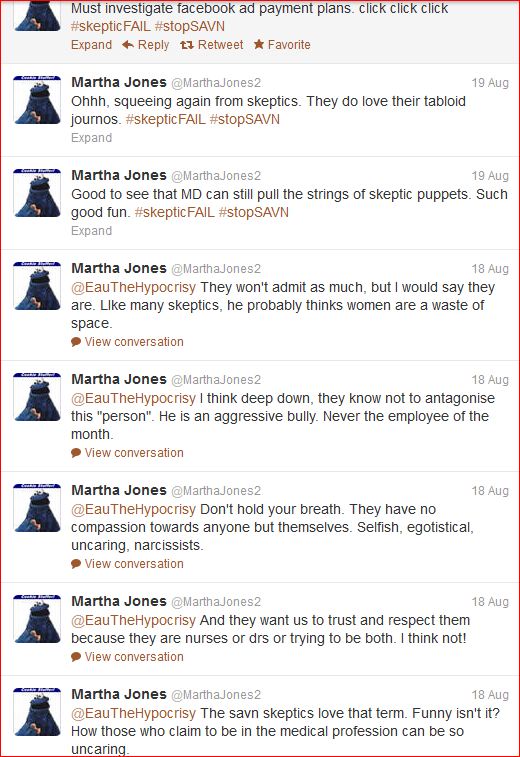 And, this nice piece

They whine about this sort of thing, but, they do it? I no compute.

I meant to include this paragraph in the original post. This is Professor Brian Martin, from his article, Debating vaccination: understanding the attack on the Australian Vaccination Network (page 35), first published in the Journal of Living Wisdom*: but, for some reason, it has made it onto the University of Wollongong’s publications list:

For the AVN, a key method of validation is to provide  personal information about some of its members, who for the most part are mature, responsible adults who look and behave conventionally.

0 Responses to Courageous *and* anonymous: the official representatives of the Australian Vaccination Network.