As we’ve come to learn, chiropractors get themselves in trouble due to their own rash actions and claims. Some chiropractors at Healing Wave Chiropractic in Newcastle appear to do this a bit.

Bryce Fleming is a chiropractor at the Warners Bay Healing Wave business. We’ve met him before in my post regarding chiropractors who brag about sneaking into hospitals, without permission, to treat their customers. Fleming stated that the more confident you are, the less questions get asked:

Tim Shakespeare is a regular attendee on this blog. He featured only very recently due to his penchant for breaching advertising guidelines, as well as for his anti-vaccinationism, among other things. Shakespeare is the principal chiropractor at Healing Wave’s Mayfield business.

Well, today they’ve outdone themselves. In a crystal clear display of their revulsion for vaccines, and towards anyone who provides vaccines, they’ve also gone full bogan.

On June 9 2014, Fleming took a photo of a medical practice, somewhere out near Parramatta, showing his disdain for the provision of an influenza immunisation:

In reply, Shakespeare advocates defecating on the door step of the medical practice. The comment is liked by Fleming:

Note: Fleming’s post was made under the public setting. It is clear that he uses his Facebook profile for Healing Wave, and for chiropractic/wellness business activities. Therefore, the comments made by him, and by Shakespeare, are being made as registered Australian health practitioners, in the public domain: 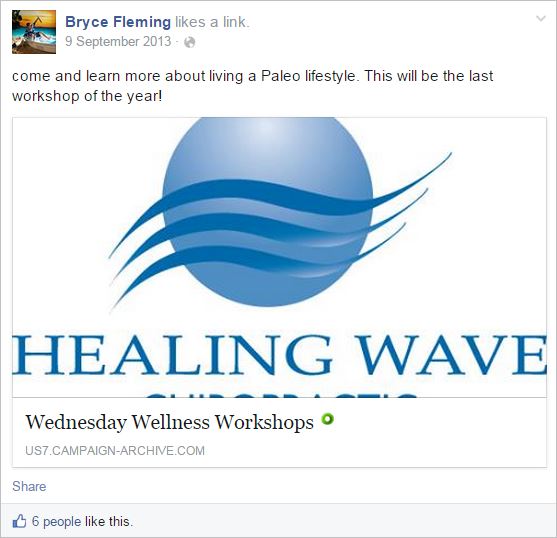