Indeed, so significant is the fact that the top of the bill is an anti-vaccinationist, that the CAA issued a media release to allay any fears that the lead speaker may have no credibility. Hell, he’s only anti-vaccine, right? He isn’t going to talk about vaccines (now). So, what’s the big deal? It’s not like this health thing, and the accuracy thing, is high on anyone’s radar, right? Here’s the media release:

“Dr Stephen Franson’s session at the 2013 NDF concerns exercise and movement, for which he is an acclaimed international speaker.”

“Dr Franson will not be addressing in any way vaccination, which is outside the scope of practice of Chiropractic.”

“Dr Stephen Franson has views on vaccination which the CAA does not support.”

“The CAA Board policy is that we encourage Chiropractors to refer a patient to a GP for advice on vaccination.”

But, hang on; on the NDF page it said Franson’s speech is about the “application of wellness principles in chiropractic”. Was it changed to “exercise and movement”? It must have been. Maybe I’m too cynical. Laurie Tassell has that effect on me.

Anyway. As they are hosting an anti-vaccinationist as their number one speaker at their professional annual event, whilst now distancing themselves from the stain of ant-vaccinationism I thought I should bring up another example of CAA sanctioned anti-vaccinationism, presented to me by a senior shill at the Glaxxon Institute of Shillery™.

Also, among the various anti-vaccination articles I have covered included the appearance of deranged anti-vaccine, chemtrailing chiropractor, the Californian Billy DeMoss, at this year’s Dynamic Growth Congress – the premier event of the CAA affiliated Australian Spinal Research Foundation (who are antivax to the core). Just a couple of weekends ago, DeMoss also appeared at the New Zealand College of Chiropractic’s annual event, Lyceum. Many Australian chiropractors made the pilgrimage for that one, including the now former CAA NSW Board Member, Tim Shakespeare. The NSW CAA are starting to act at least.

Well, today, I can show you this outrageous example  of the anti-vaccinationism of the Chiropractors’ Association of Australia.

In August 2009 the CAA’s South Australia franchise held their Annual General Meeting. So, this is not just any event. The AGM is a big deal in the life of any organisation. What is most stunning is the seminar which was held immediately following the 2009 AGM. See for yourself: 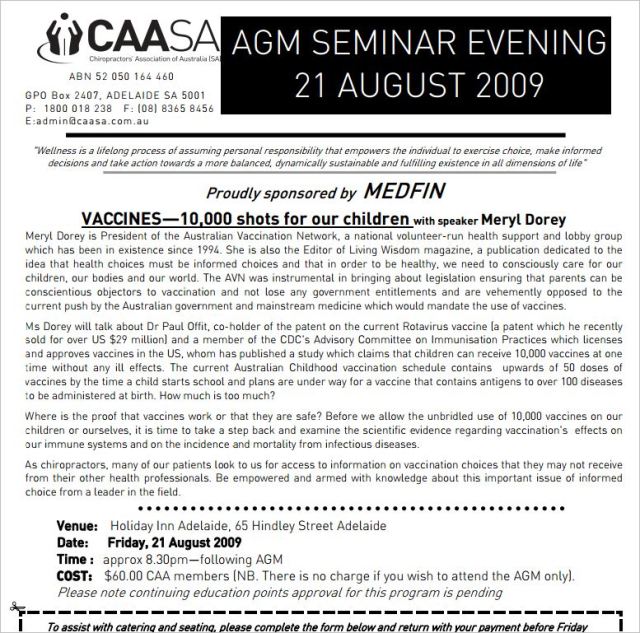 Even the title is a lie. Here is the text:

VACCINES—10,000 shots for our children with speaker Meryl Dorey

Meryl Dorey is President of the Australian Vaccination Network, a national volunteer-run health support and lobby group which has been in existence since 1994. She is also the Editor of Living Wisdom magazine, a publication dedicated to the  idea that health choices must be informed choices and that in order to be healthy, we need to consciously care for our  children, our bodies and our world. The AVN was instrumental in bringing about legislation ensuring that parents can be  conscientious objectors to vaccination and not lose any government entitlements and are vehemently opposed to the current push by the Australian government and mainstream medicine which would mandate the use of vaccines.

Ms Dorey will talk about Dr Paul Offit, co-holder of the patent on the current Rotavirus vaccine (a patent which he recently sold for over US $29 million) and a member of the CDC’s Advisory Committee on Immunisation Practices which licenses and approves vaccines in the US, whom has published a study which claims that children can receive 10,000 vaccines at one time without any ill effects. The current Australian Childhood vaccination schedule contains upwards of 50 doses of vaccines by the time a child starts school and plans are under way for a vaccine that contains antigens to over 100 diseases  to be administered at birth. How much is too much?

Where is the proof that vaccines work or that they are safe? Before we allow the unbridled use of 10,000 vaccines on our children or ourselves, it is time to take a step back and examine the scientific evidence regarding vaccination’s effects on our immune systems and on the incidence and mortality from infectious diseases.

As chiropractors, many of our patients look to us for access to information on vaccination choices that they may not receive  from their other health professionals. Be empowered and armed with knowledge about this important issue of informed choice from a leader in the field.

The CAA SA bought Dorey’s lies about Dr Paul Offit hook, line and sinker. Not only that, they enhanced Dorey’s lie to create a bigger lie: “Before we allow the unbridled use of 10,000 vaccines on our children or ourselves…” I don’t even have any words for that grade  inept duplicity.

The lies about Dr Offit, told above, have been addressed by Liz Ditz. I’m not going to go over it again. Here is an expanded list:

Meryl Dorey: Seven Assertions. One is Factual. Six Are False.

Here are Meryl Dorey’s claims, made September 22, 2011 on the Australian Vaccination Network Facebook page (image and link at the bottom of the post).

That Approved His Rotavirus Vaccine — FALSE!

Paul Offit “Has Set Himself Up” As An Expert on Vaccines — FALSE!

Paul Offit Published A Study Proving the “100,000 Vaccines at Once” Safety Claim–FALSE!

We’ve also seen the lie about the “upwards of 50 vaccines” before as well. Another friend has tidied up this particular lie, here, after having her jimmies sufficiently rustled once too often by Dorey’s  persistent guessings and wrongifications.

So, there we have it. Meryl Dorey, of the peak anti-vaccination organisation in the country, was given an official platform to lie to the CAA SA, by the CAA SA, the state chiropractic representative body, at their AGM; and she was doing it for $60 a pop. That’s really bad.

But wait. There’s more. Dorey’s two-hour lie-fest also went toward two hours of CPD, just like the CAA did with O’Shea. Two hours of professional training. From an anti-vaccinationist whose greatest gift is getting stuff wrong, after hearing stuff over a back fence, for twenty years. I mean, at least O’Shea was a chiropractor. He has some qualifications of sorts. Dorey? Nothing:

One would hope that in the current climate the Chiropractors’ Association of Australia would look very dimly on any board members who were in charge at the time of that abomination. There appears to be a push on to cleanse the National and State boards of the stain and infection of anti-vaccinationism which has dwelled there for so long, unhindered, and flourishing.

So, who was on the CAA SA Board back then? Here it is. I expected Brett Hill. But, he’s not what I’m really looking for today. Back then Hill was a member of VISA: a different anti-vaccine organisation. Who else was on the 2009 Board? 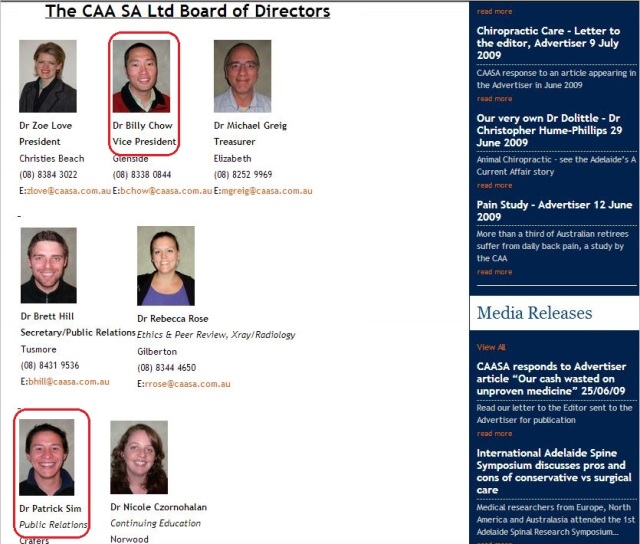 I would love to say that the anti-vaccinationism of the CAA is all in the past, and that this sort of thing doesn’t happen any more. But, all one needs to do is peruse the personnel of the various boards. They need a fire-hose, and a tanker of Dettol, and they need it now.