In what I am hoping can only be a shadenfreudeliciously costly affair, the rabid anti-vaccination pressure group, the Australian Vaccination Network, has lost its appeal against the NSW Department of Fair Trading, in the NSW Administrative Decisions Tribunal. The AVN had been ordered to change its Orwellian, inaccurate name to better reflect its true intent. It appealed. It lost. It will cost.

The decision can be found, here. Here are the reasons given:

2 AVN applied to the Tribunal for a review of that decision. I have decided that the decision to direct AVN to adopt a new name is the correct and preferable decision. But my conclusion is not based on a finding that AVN’s message is exclusively anti-vaccination, that the name suggests a connection with the Commonwealth government or that the name itself is undesirable.

3 AVN’s main object is the dissemination of information and opinions that highlight the risks of vaccinations. AVN is sceptical about vaccinations. The existing name, Australian Vaccination Network Inc, suggests that the association is pro vaccination or, at least, is committed to providing comprehensive information and opinions about the pros and cons of vaccination. The name should be changed so that it is not likely to mislead the public in relation to its main object. Although I do not have to decide this issue, a name that includes the word “risk” or “sceptic” such as Vaccination Risk Awareness Association Inc or Vaccination Sceptics Network Inc would, in my opinion, be acceptable. The name could also include the word “Australia” or “Australian” without suggesting a link to government.

“Does he have an inside track?” Apart from an awareness on the usage of modern communication devices…no.

One can only hope that all AVN assets, and profits from the sale of assets, will be monitored closely by the Minister and his department. From an AVN newsletter, dated November 22 2013:

…just giving you a head’s up that we will be selling off filing cabinets, computers and other office equipment. If you are in the market for some really good quality gear at a great price, please keep your eyes open and wait for our next newsletter.

Yours in health,
Meryl Dorey 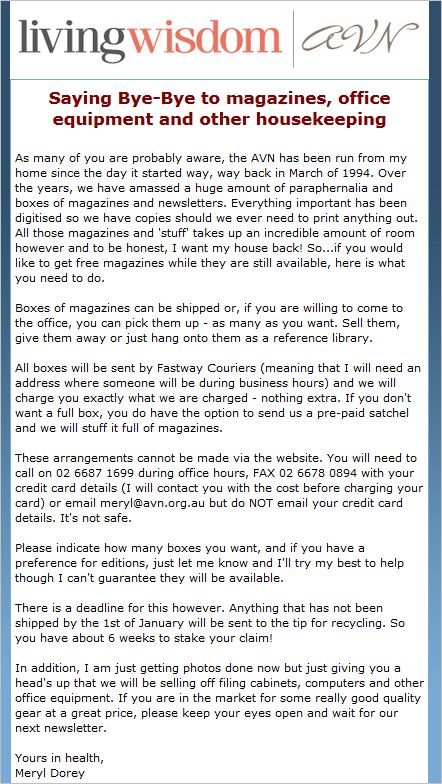 So, I guess Stop the AVN succeeded, at least in name. Congratulations to everyone who has ever been involved. Much has been achieved. We were even able to influence legislative change. But, we couldn’t have done it without the constant, tenacious input from this person. Our greatest asset. The person most responsible for the aforementioned legislative change and every Stop the AVN success…

The AVN issued this awesome press release a few hours after the ADT decision. Possibly telegraphing that Dorey and Beattie know any appeal would be fruitless and costly, they included this spectacular paragraph; because there can never be enough venom for anyone who rules/finds against them:

We believe that the Administrative Decisions Tribunal (ADT), in finding against the AVN, exemplified the current climate of government-sanctioned abuse and hatred of anyone who steps away from mainstream medical dogma.

It’s always everyone else’s fault. This includes Stop the AVN, the government/s, magistrates, journalists, grieving parents…you name it, it’s their fault. Narcissists are never at fault.

ABC’s Lateline program covered the day’s events with an interview with Dr Rachael Dunlop. Dorey stuck her head in and claimed that many of her critics are pharma shills and/or have ties with the NSW Government. She mentioned conspiracy theories without a hint of irony. It is very amusing: