Vocal anti-vaccination midwives and RNs in our public health system. Is this what we want?

We have known for some time that there is an undercurrent of science-denial in health care professions. I am always astonished, however, that one can go through a degree focussed on best-practice, evidence-based healthcare; yet, come out the other side with a degree in one hand, and anti-vaccination beliefs in the other.

Of course most of us have heard about the Patriot Nurse, the US-based, gun-toting, uber-libertarian who makes YouTube videos, the like of which Mike Adams would be ashamed (okay, maybe not). We have similar problems Down Here as well. Only today I had to update my post, Kerry Baker: Registered Nurse; AVN Supporter; Vilifier of Grieving Families. In the last few months another vocal and publicly strident anti-vaccination midwife has begun to show her public support for the Australian Vaccination Network, using her qualifications and job position to add gravitas to her anti-vaccination support. This is a worry. She is not the first. She will not be the last.

Meet Joanne Howard, whose Facebook profile showed that she works at Goulburn Valley Health, as an RN/Midwife. This is a person who is at the front line of maternal and neonatal health care. 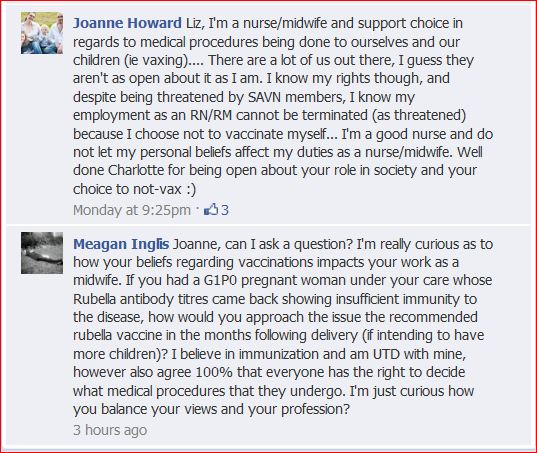 A perfect question. A legitimate question. I don’t think Howard answered this one. From the AVN Facebook page July 26 2012.

This is a person to whom parents look for health information. I am in no way suggesting that this person allows her views to interfere with her role. But, I am puzzled at to how someone with such firmly held anti-science beliefs can work in a role which would be unconscionable to those self-held beliefs. I am also puzzled as to how someone who cares for those who are in such a vulnerable position, and can see the harsh and sometimes brutal realities of early life, and the consequences of such, can publicly support and promote anti-vaccination myths, using her profession to do that. There must be a code of conduct somewhere for that. Surely there is a retraining manual? Where did all of the evidence-based training go?

Here is Howard on the AVN Facebook page on July 28 2012, pushing the dual anti-vaccine lies, that vaccines cause autism, and SIDS. Howard is certainly in some prestigious anti-vaccination company with this trope:

I’m starting to think that Howard’s hubris has gotten away on her. Does this person ever talk to the medical professionals with whom she works?

Yes. You read that right. A registered nurse/midwife, working in our public health system, spreading anti-vaccination myths, stating that “vaccines are not safe or effective”.

Howard has also been busy in her attempts to shut down any criticism of the Australian Vaccination Network. There is some hard-core anti-vaccination fundamentalism being practised here, the like of which has recently, and frequently, been carried out by Meryl Dorey and her generals. Here is Howard proudly proclaiming that she has been on a deceitful and malicious reporting spree, in an attempt to shut down the Stop the Australian (anti) Vaccination Network Facebook page. Not only has she been acting in a malicious manner, for the cause, she has repeated that she is untouchable, crank beliefs or not:

Dragging her co-professionals down with her by stating that immunisation is “not worth the risk”? I’d like to hear their views.

I’m not sure I would be comfortable working alongside this person. And I believe that parents have a right to know who is providing their health care. And I strongly believe that health care professionals have a duty of care to their patients, families, and co-workers, to take all the evidence-based steps they can to reduce the spread of disease, and misinformation, in our shared community. It’s up to the public health system as to whether or not they retain this type of individual; but, I can only hope some serious retraining and education can be provided for someone in this person’s position of influence.

Personally? I would like her to gtfo of our hospitals. But, that’s just my opinion.

0 Responses to Vocal anti-vaccination midwives and RNs in our public health system. Is this what we want?