Posted on November 9, 2013 by reasonable hank

There is something I have been putting off for quite some time. Then a friend made this something possible by providing me with a link so I could watch the 100 minute chiropractic advertisement, Doctored the Movie. This so-called friend will be receiving an invoice in the mail for my upcoming, week-long Maxolon infusion.

I’m not going to offer an in-depth review of the advertisement. Broadly though, it is an anti-medicine, testimonial driven Strawman, accusing the medical profession of ignoring the basics of health in favour of medicating at all cost. It makes some standard points: eat well; exercise; don’t medicate for conditions for which you shouldn’t; beware of over-medicating. It’s pure genius. Who else could have thought of these things apart from chiropractors? The advertisement runs on emotion. It is chock full of dubious diagnoses; even more dubious treatments; personalised interviews with chiropractors and their miraculously healed customers; and victims of heartless medical practitioners – practitioners who may as well be pushing a cart yelling “bring out your dead”.

There was a segment of what appeared to be live blood analysis diagnosing chronic Lyme Disease, the analysis finding the blood sample was full of “parasites”; there was a segment depicting the successful treatment of autism in a child whose brain was “turned back on” by adjustments; there was a crescendo of anti-GMO hyperbole, fallaciously correlating the rise of GMOs with an explosion of auto-immune diseases, topped off with a spattering of Mercola, just to make us certain they are talking out of their arse. All of this was interspersed with the self-congratulatory wank we have come to expect of non-evidence based chiropractors who pine for legitimacy, using whatever tactics they can muster to make it so.

Anyway, the real reason I wanted to watch this thing was to investigate the anti-vaccine message I had heard is contained therein. Given the Chiropractic Board of Australia’s long-awaited clampdown on the anti-vaccinationism which infects the Chiropractors’ Association of Australia and its off-shoot, the Australian Spinal Research Foundation – which is a goddamn charity which is meant to spend its money on research – I wanted to make sure I had seen the advertisement before commenting.

So, given that this thing had been promoted by the Chiropractors’ Association of Australia… 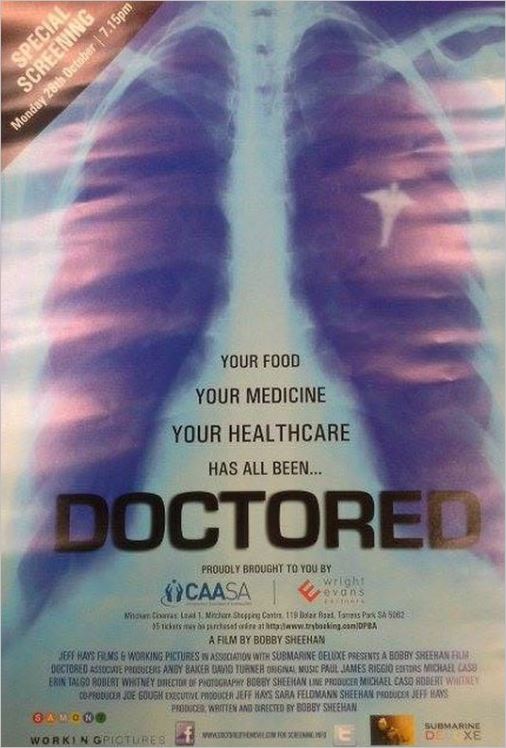 and, given that it had also been promoted by the Australian Spinal Research Foundation…

…I wanted to be sure that my eyes and ears were not deceiving me.

47 minutes into the chiropractic advertisement we meet Papa Wingnut, telling us that Gardasil is “GOVERNMENT MANDATED POISON”. The appearance of Alex Jones follows directly from an intensive, extended examination of a real problem: addiction to prescription painkillers. What does it have to do with Gardasil? Nothing. Here is the transcript I made of Jones’ screed (you can send me drinks to any destination determined by yourself):

Merck is invading the planet. They are everywhere, buying politicians, and pushing their dangerous cancer virus vaccine that’s been proven that 18,000 plus people have had adverse reactions; auto-immune diseases; and even death! [obviously punctuation is mine, not Jones’] 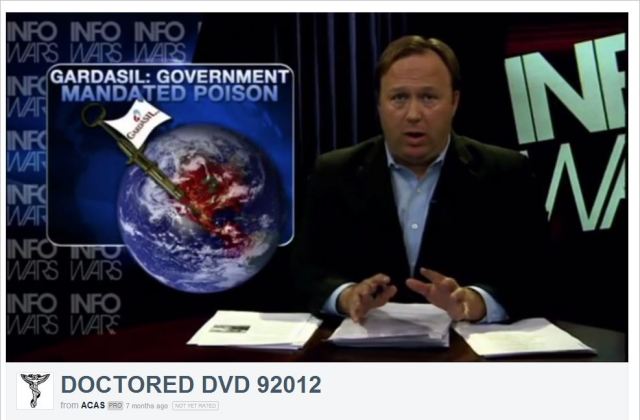 I could just end this post right here. In the world of anti-vaccination bollocks, Jones is the mother lode. You can generally exit any internet comment stream safe in the knowledge that you are dealing with a lunatic once they provide you with a link to Alex Jones, or Infowars, to back up their case. Maybe the producers of Doctored should have used the Time Cube guy, or included a whale.to segment, with owner/publisher John Scudamore riding one of his pigs, named “Zion the Elder”, whilst barking at passing cars? It would be just as reputable as actually putting Alex Jones on camera. And yet, they did it.

Approximately 10-15 minutes after the Jones appearance the vaccines-cause-autism lie is also presented…by a Canary Party representative. I’m serious. There are several stock-standard anti-vaccine tropes included in this segment: package inserts; ingredients; possible adverse reactions; the existence of the vaccine injury courts; recipients of payouts being silenced; and others: 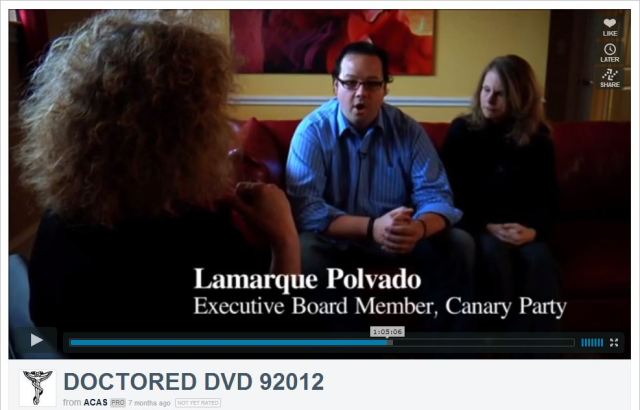 In that aforementioned, approximate 10-15 minute interval between anti-vaccine screeds, something really sinister happened. I wasn’t expecting it. The duration was mostly filled with a paean to Stanislaw Burzynski. The anti-vaccinationism was bad enough; but, praise for a man who has systematically taken millions of dollars from vulnerable cancer patients, and their families, with nothing in return but false hope and sad deaths? That goes below despicable.

For a detailed examination of the hurt caused to vulnerable people, by Burzynski, please peruse this site. It is really, really sad. It is infuriating. It should not need to exist:  The OTHER Burzynski Patient Group.

And I highly recommend reading this new information on Burzynski. Destroying clinical trial documentation, and refusing to record adverse events? There are no words:  Damning FDA findings about Stanislaw Burzynski’s trials

And Doctored gave him a stage…

I don’t really have anything else to say  about Doctored. It speaks for itself, as do the Chiropractors’ Association if Australia, and the Australian Spinal Research Foundation. Loud and clear, what?

Several other chiropractors have promoted the advertisement, knowing full well what is presented. Here is a small sample:

Here is CAA SA Board Member, the anti-vaccinationist Rory Onley: 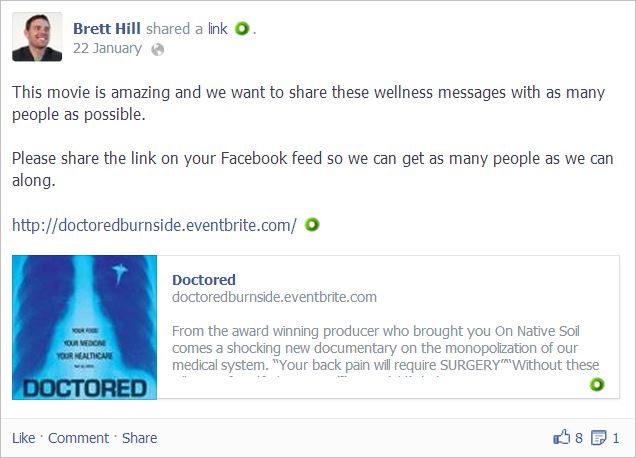 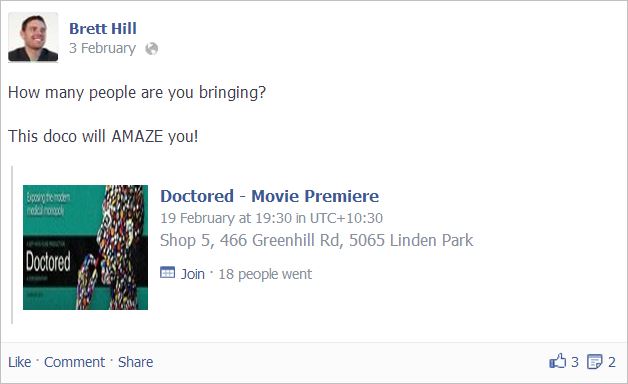 I’m off to watch Derek on YouTube. I need something nice, and kind, to wipe away the stain on my brain. I lost my kind, somewhere, and am slightly angry that I’ll never get it back, along with the several hours of my life spent on Doctored, that self-fellating chiropractic piece of crap.

This brand new video was published simultaneously with my post, so I include it now.

Bob Blaskiewicz is a man who tells the stories of the real victims of Burzynski. This talk is well worth watching: