Meryl Dorey approves of apologies – she just doesn’t provide them

Posted on January 3, 2012 by reasonable hank

Meryl Dorey wrote another blog post. It’s yet another attempt at playing the victim. I’m not going to pull it apart, as this isn’t the point of this post. I’ve already pulled apart a tactically similar Dorey post, here; and outlined the demonstrable lies and false accusations of Meryl Dorey, here. For a more recent example of Dorey making false accusations, whilst libelling an Australian journalist in a press release, see here. Did I mention that the last one was a press release? Sent to hundreds of media outlets? Indeed. 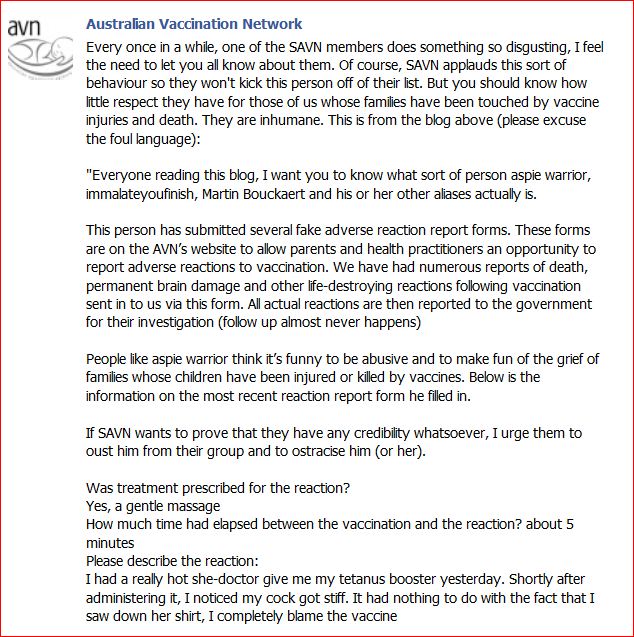 First off: Martin issued a full and unconditional apology to Meryl Dorey, immediately following the publication of his confidential, silly, fake adverse reaction report. Martin makes it quite clear who was responsible, and who was unimpressed. Dorey’s post was the first I had heard of it; and, I am not alone. To Martin’s credit, his stance in accepting responsibility for doing something silly, and his immediate heartfelt apology (and believe me, the apology is from the deepest recesses of his heart), are inspiring. It takes a person of intellect, honesty and courage to put their hand up as Martin has done: 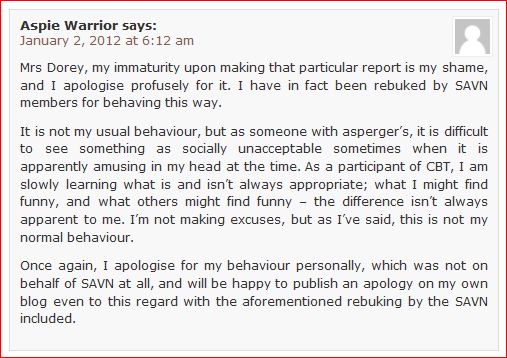 Meryl Dorey has accepted Martin’s apology, unconditionally (one would presume):

Meryl Dorey also made this post on Facebook (out of interest, have a look at the thread, where Martin is accused of crying “crocodile tears” by another “Johanna Holland” fake account):

Meryl Dorey has again made direct, public accusations against Stop the AVN, that:

1. SAVN applauds this sort of behaviour

2. [SAVN has] little respect … for those of us whose families have been touched by vaccine injuries and death

I ask Meryl Dorey to provide evidence that SAVN has applauded Martin’s actions.

I ask Meryl Dorey to provide evidence that SAVN has little respect for those killed or injured by vaccination.

I ask Meryl Dorey to provide evidence that SAVN is inhumane.

Unless Meryl Dorey can substantiate her accusations, I would expect that a full apology, and retraction, will be forthcoming. I cite Meryl Dorey’s own words in the hope that she might listen to herself, if not anyone else:

I accept that anyone can say something that they later regret and it [takes] courage and integrity to apologise.

I’ll include one of the many comments I made on the Dorey blog post, none of which have been published (I didn’t expect they would be). This was made before Dorey’s comment about Martin [note: I do find it interesting that my unpublished calls for MacDonald to be removed from her organisation for harassment, as per her own statements to this effect, precipitated Dorey’s calls for SAVN to do likewise. Hmm]: 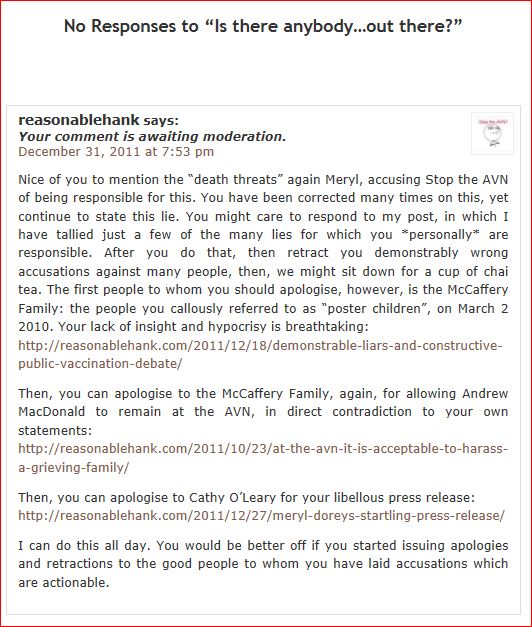 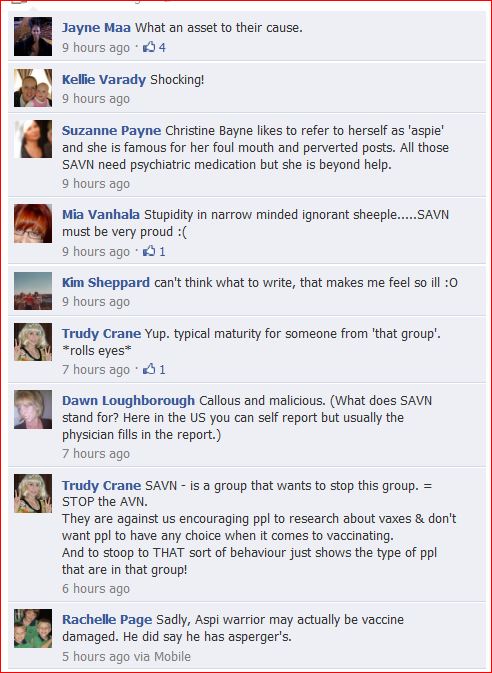 Nice. They answered the call.