Posted on January 7, 2012 by reasonable hank

[Thank you for showing] respect even if you don’t agree with us. I wish everyone could show the same restraint as you have. Thank you. Meryl Dorey www.avn.org.au

I love it when Meryl Dorey goes on a persecution rant. I love it when she points out how haters gonna hate and abuse (“hate” and “abuse” meaning someone has investigated several of her claims and found her to be a demonstrable liar). I love it even more when she allows her own special little people, who practise this, to remain on her Facebook page. I love it even, even more when you let her know, and her hubris and spitting hatred of you makes her ignore (or block?) your emails.

I’ll be frank: I couldn’t really care too much about courageous, anonymous internet cowards calling names; making how ugly is she jokes, he’s a wanker jokes; he’s a short faggot jokes, on the internet. But – and this is important – I do like to point out the hypocrisy of Meryl Dorey and her AVN, as it goes straight to integrity. Dorey and the AVN have none.

There is a Facebook page set up by courageous, anonymous, anti-vaccination AVN supporters, called Stop the Australian Vaccination Network Now – Say Yes to Neurotoxins. Yes, it’s really called that. It has been set up to do something, of which I’m not sure. But, it is serving a very useful purpose: showing the hypocrisy of Meryl Dorey and her anti-vaccination colleagues.

One of the regulars on the page can be seen in action, here.

Here is one of the page admins; the artist formerly known as Liz Whatsherface/Twotits/Sheisser [“shitter”, in German], now Liz Hempel:

Here is Liz stating that she is an admin of the “Neurotoxin” page:

This is no secret. Liz openly refers to her own AVN posts and conversations

I thought I’d provide some recent screenshots of the Neurotoxins page, administered by a current AVN contributor, and her partner, and other AVN contributors, helped along by a now well-known anti-vaccine troll. If you have the energy to scroll through the page, you will see some startling homophobia and other delights.

Amy is an oncology nurse. She helps treat people who have cancer, and also deals with the horrors of advanced cancer on her patients, their family and friends:

Sue is an emergency physician. I don’t need to explain any more than that, do I? 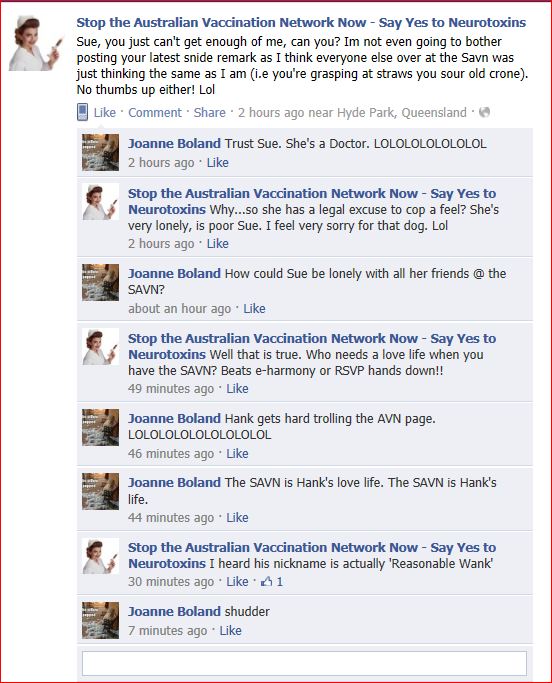 Reasonable Wank – get it? I slapped my thigh.

Here’s some more from Liz’s partner (“partner”: a claim made by this individual which has never been denied by Liz), and his alter egos (the link is a blog Liz created to vilify Martin): 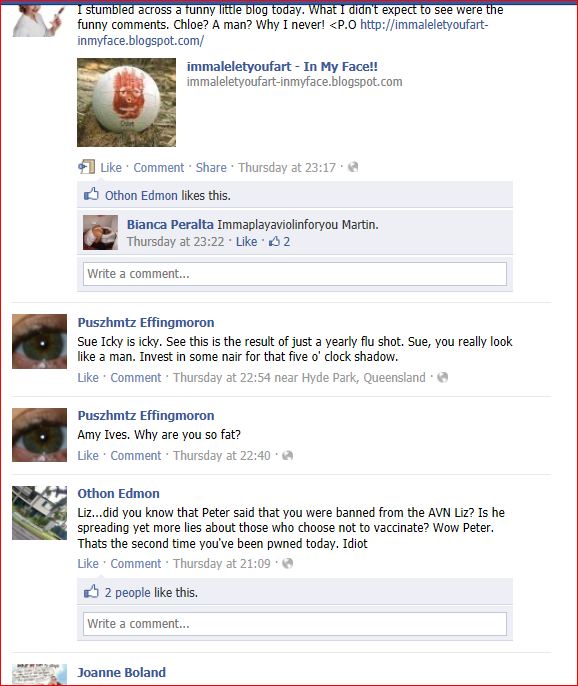 Here are the lovely admins in full swing: 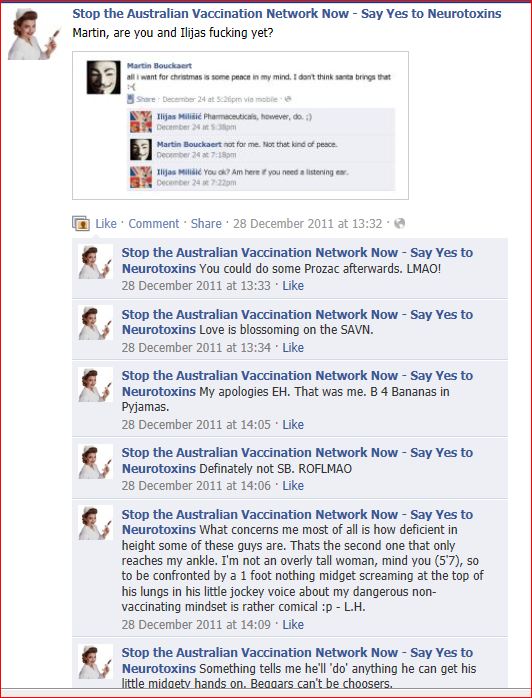 No wonder Susan Butler is absent from the AVN page. With friends like Meryl…

Here are some polite Facebook Personal Messages, sent to Amy by Liz Hempel’s partner (copypaste received by me):

And here is another one sent to Amy, by Liz herself (copypaste as  well):

Another *yaaaaawn* fake profile created by our heroes

These Facebook Personal Messages were sent to Annette, by Liz:

and, this charming one; sent on the same day:

Like I said above: Meryl Dorey is aware of these people. I sent her an email this morning (10 hours ago). Maybe Meryl Dorey will listen to her own words, as she refuses to listen to anyone else (but, I’ve said that before):

If [AVN] wants to prove that they have any credibility whatsoever, I urge them to oust him from their group and to ostracise him (or her).

It’s all yours, Meryl. Really. I mean that. It really is all yours.

As shown in the following screenshot, Meryl Dorey and her AVN have no intention of acting  on the continued presence of Liz Hempel, and other fake accounts, on their Facebook page. Courageous, anonymous admin “RR” continues to defend Liz’s demonstrably unconscionable conduct. Of note, RR admits that many fake profiles are created by “Johanna Holland”: this admission ironically being made right underneath one of the Holland fake profiles, “Suzanne Payne”. Liz threatens legal action, quietly and conveniently forgetting about the wealth of documentation of her behaviour. You couldn’t make this up.