– A re-share of another personal favourite success story of mine, and another person who was through the medical system and royally screwed over and almost permenantly maimed as a result. I’m re-sharing this today because I am putting as much positive energy out into the universe as possible because I’m seeing a coma patient (posted about earlier this week) this afternoon

– PATIENT would have at least 2 major seizures a week and had 10-15 smaller seizures EVERY SINGLE DAY!!!

– PATIENT was given all the medications and essentially over PATIENT’s life became an experiment of the pharmaceutical industry. PATIENT never took a single medication that helped PATIENT’s seizures

– It was then decided that after reviewing MRIs an CAT scans that all showed no evidence of anything wrong, the neurologist / neurosurgeon said the best course of action was to slice PATIENT’s head open, look for anything abnormal and remove it and see what happens. (You know, evidence based medicine at it’s finest)

– 4 weeks before this, they met me at the music festival. The PATIENT had 2 seizures while talking to me

– Sure enough, the subluxation pattern included a kyphotic neck. So we began adjusting PATIENT

– Within 4 adjustments, we saw a reduction in seziures from 10-15 a week to 3 a week and no major seziures that week

– I know what you’re thinking. The surgeon would be thrilled to hear he got better…..

– He personally called the PATIENT’s FAMILY MEMBER and bullied FAMILY MEMBER into coming in for testing, by telling FAMILY MEMBER that FAMILYMEMBER was an idiot and an irresponsible FAMILY MEMBER by cancelling the surgery. He did not know about chiropractic care yet, they never disclosed that

– I received a phone call from the surgeon. He barked at me about “stealing his patient” and a whole host of other standard party lines I’m sure you’re all familiar with

– Being a non-combative and generally a placid guy, I just asked him if his patients were his property and therefore possible for me to steal

– He began to bark at me some more so I just hung up on him. He called back and asked why I wasn’t getting riled up by him, and I told him I was too busy helping people get better to be involved in a war of egos and I hung up. He did not call back

– As many of you know I adjusted a PATIENT who’d been a coma for 9 months and shortly after PATIENT’s second adjustment, PATIENT woke up

– I left for a long planned dream trek to Bhutan shortly after, but I’m back now

– I’m thrilled to report that PATIENT is talking, has regained most of PATIENT’s memory, though PATIENT has no memory of the day of PATIENT’s car accident, and has told me that PATIENT remembers the second time I adjusted her as PATIENT felt a “warm energy flow through PATIENT’s body” immediately afterward

– WHile I was away, they began some physical therapy rehabilitation, PATIENT is now being taken to a swimming pool to start the process of slowly exercising PATIENT’s muscles

– I adjusted PATIENT2 for the first time this morning

– I respectfully ask that if you choose to share this story with anyone, please do not use my name or the country I’m from as this violates my local registration board rules. This post is intended for discussion on this close group page ONLY, among chiropractors ONLY in a professional manner and is NOT intended to be shared as an advertisement or testimonial. If you are troll on this page intending to re-post this elsewhere and do what trolls do, I hope some day you choose to get a life 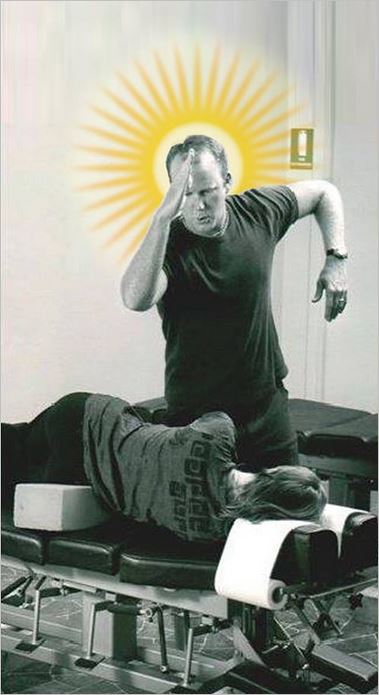 0 Responses to The Chiropractic Messiah Monologues 5