– Several days back, I posted about some success stories I experienced while trekking in Bhutan

– I received an email from them this morning saying that “The man with magic hands is celebrated by Komico (the PATIENT’s name) and PATIENT’s family. PATIENT’s ears are healthy.”

– PATIENT has been deaf in one ear all PATIENT’s life. PATIENT had a very traumatic birth

– By the time I called PATIENT’s FAMILY MEMBER to check up on PATIENT that evening, PATIENT’s hearing was restored!!

– They took PATIENT for testing on Saturday. 100% function

– PATIENT gave me this drawing, declaring me part of the family.

– I’m too tough to get teary. But i have to do something about the recurring problem of getting dust in my eyes at work…

[Drawing by PATIENT not shown here. Here is a drawing of a sqiril in its stead, drawn by my daughter who was then aged 4. They are acorns] 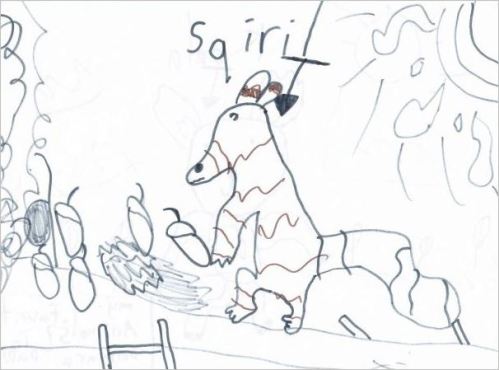 – Judging by the number of people who message me after I post a cool story, I’ve probably given the false impression that I have a eutopian practice and I never have crap days or crappy moments in practice. Not true, I do

– Yesterday however was no such day. It was AWESOME!!!!

– In addition to the drawing I received from the PATIENT who got PATIENT’s hearing back (see previous post) another highlight was my monthly evening workshop. At the end, I normally tell a cool story, (usually has been posted here by that time) As I was about to launch into my story, a PATIENT who’s been a patient for 5 months put up PATIENT’s hand and asked if PATIENT could share PATIENT’s experience with chiropractic

– PATIENT said that last year PATIENT was put on the list for a liver transplant. PATIENT’s XX years old, in the process of making a lot of changes in PATIENT’s life

– So I met PATIENT while screening at the local Mind / Body / Spirit expo and PATIENT became a patient. Not surprisingly, we found a kyphotic neck and a whopper of a subluxation at T8….. (uh… can anyone say, “direct nerve supply to the liver?”

– Anyhoo, last night PATIENT got up and said PATIENT had medical testing done on PATIENT’s liver. To PATIENT’s specialist’s great surprise, 98% function was measured. He said, “Your medication must be finally curing you.”

– PATIENT said,”Uh, I stopped taking my meds within 3 months of becoming a chiropractic patient.”

– He opened his mouth to start bitching at PATIENT. PATIENT cut him off and said, “Save it. I already know what you’re going to say.”

– So yesterday the family was in for their adjustments. NAMED, the little PATIENT, told me PATIENT was explaining chiropractic to PATIENT’s teacher and class mates. It was PATIENT’s “show and tell” (I remember that!!!) thing. PATIENT brought in PATIENT’s hearing aid to “show” and to “tell” why PATIENT doesn’t need it any more!

– PATIENT told me PATIENT said to her class, “I don’t need this thing because I’ve got a doctor inside me that was switched on by my chiropractor.” (Insert Rob’s heart melting right here)

– PATIENT’s teacher was fascinated, and called today to book in for a new patient consultation. On the phone TEACHER told my CA that NAMED had said, “Dr Wob can help switch your power back on so you don’t get headaches.” (Insert complete heart melt down here.)

– The PARENT1 of one of PATIENT’s class mates also later rang up to book PARENT1 and PARENT1’s CHILD1 in, who has been suffering recurring ear infections

– Yet another career first….. successful marketing at a Kindergarten Show and Tell game. : )

– PATIENT suffers extreme anxiety. And I do mean extreme

– Anyway, FAMILY MEMBERS finally managed to bring PATIENT in to see me 4 weeks ago

– Not surprisingly, PATIENT’s subluxation pattern included a kyphotic neck. And PATIENT has a very tilted and rotated pelvis and very tilted shoulders, a subluxation at T5 measuring 14 degrees tilted to the right

– So very carefully and gently I began adjusting PATIENT. PATIENT would not allow manual cervicals to be done, So I’ve been using activator in addition to my regular CBP prone drop and toggle

– I’m not going to say that PATIENT is completely over PATIENT’s anxiety. But PATIENT recently smiled at me, laughed at one of my bad jokes that I was making to someone else as the family walked in to the office…… and most importantly PATIENT is back to school!

– So could it be that subluxation is the only cause of PATIENT’s anxiety? I’ve seen that before. Could it be that subluxation is big factor in making PATIENT’s anxiety much more extreme around whatever the issue is? Absolutely seen that before. The only thing that has changed is that PATIENT is getting adjusted, and the outcome is PATIENT is going to school again. PATIENT still looks very nervous, more so than your average shy kid, but the expression has gone from absolute fear to a nervous tension after 4 weeks of getting adjusted

– Perhaps one day we’ll find out what the issue is. Perhaps not being subluxated is what PATIENT needs to find the strength / courage to share with someone whatever trauma has happened

– PATIENT’s NEVER gotten anything above 71%, and that was the one and only time PATIENT cracked into the 70% in PATIENT’s 3 years of school so far

– PATIENT appeared to be developing normally, but when PATIENT was XX, PATIENT was bullied

– PATIENT was knocked unconscious, diagnosed with a concussion and had a brain bleed that required surgery

– We found PATIENT’s Atlas severely subluxated and PATIENT has a kyphotic neck. There is absolutely no contraindication to adjust PATIENT, so despite the PATIENT not suffering acute low back pain…..gasp!!!…… I adjusted PATIENT

– PATIENT’s had 3 adjustments to date

– PATIENT’s teacher reported she hasn’t noticed that PATIENT’s “zoned out” in about 2 weeks. PATIENT’s FAMILY MEMBERS reported the same. No zoning out at home either. I’m sure it’s a coincidence….. but PATIENT’s last adjustment was 2 weeks ago

– I’m mildly curious about people’s experience with having an M.D. say to you or one or more of your patients who recovered from something, “That’s Spontaneous Remission Conicidentally Timed With Chiropractic Adjustments.”

– See my earlier post today where I coined the acronym S.R.C.T.W.C.A.

– It seemed to generate some interest

– I’ve had that exact phrase used numerous times throughout my career, and the first time I heard that EXACT line was when I was 16, having recovered from heart problems

– I know I’m not alone in this, but I ask any and all of you to share a story, whether on this thread or in a seperate one, where someone tried to convince you or a patient that their healing was because of S.R.C.T.W.C.A.

– Synonyms of course are allowed – all true words have them, and let my legacy (joke! no freak out please) to the profession be this acronym!

– I’m off for an internet / phone / all other forms of outside world contact free weekend in the Sunshine Coast hinterlands. Hope to read some stories of this nature when I get back!

– We’ll call it a scientific experiment…. my hypothesis is that it happens A LOT

July 31 – Made up acronym; Bedwetting, ear infection, deafness all cured. Referrals from kindergarten. Hutchings is “Unfuckwithable”.

– Remember the post about the PATIENT who got PATIENT’s hearing back? PATIENT was deaf in one ear and remarkably encountered the now verified medical condition known as S.R.C.T.W.C.A.  (Spontaneous Remission Coincidentally Timed With Chiropractic Adjustments) As many may remember from a few weeks ago, PATIENT got PATIENT’s hearing back, took PATIENT’s old hearing aid to PATIENT’s Kindergarten show and tell, “Showed” it and “Told” why PATIENT doesn’t need it anymore

– PATIENT’s TEACHER who suffered headaches called up and booked TEACHER in. TEACHER told me TEACHER has constant headaches, at least 6 out of 7 days a week. TEACHER’s been getting adjusted for 8 days and has not had a headache since TEACHER’s first adjustment. Another wonderful case of S.R.C.T.W.C.A.

– But the story of the little PATIENT1 continues. PATIENT1’s PARENT1 says now PATIENT1 sleeps much better, completely through the night and does not wet the bed anymore. Imagine that? S.R.C.T.W.C.A.. TWICE in the same person

– As a result of that previous post, I was the target of trolls. In addition to coining the acronym S.R.C.T.W.C.A., I’ve also added the below word to my vocabulary

0 Responses to The Chiropractic Messiah Monologues 6